Hello!  A little different from usual, I’m typing this post from an Alpaca farm near Lake Windermere.  Honest!  And the Wifi is a little ropey, thus my reflections on OWOP are a little late.  And, extra honest – getting ready for the holiday took over last week, so I only have pictures for 4 of the 7 days… but I did faithfully wear my Simplicity 2588 creations (while grinding my teeth in frustration that I seem to have lost my purple Sew Grateful skirt…) 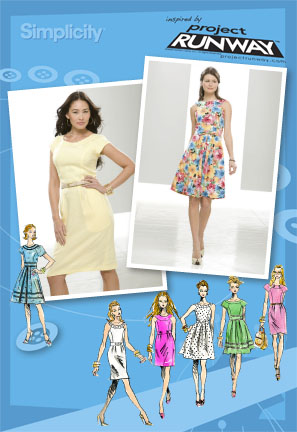 But the most successful OWOP day by far was Tuesday, the one-off outing of my Apple dress.  Almost everyone I met commented on it – from a colleague who said it looked like an Orla Kiely (I copied it from Orla Kiely! I whispered excitedly in the meeting) to the man in the corner shop who asked for an apple (but not in a creepy way).  I chickened out of asking one of them to photograph it though, so this is the best I could do by myself:

I paired it with a thrifted jacket I found for £5 in a charity shop:

(Ok, so the prints don’t really match, but I felt I could carry it off with a ‘hey, I’ve deliberately clashed some prints together’ rebellious shrug. No-one pointed or shouted anyway.)

Thanks again Tilly for organising OWOP – it forced me to wear this dress to work, and I actually liked it!  It was nice to have a bit of back-up when people said “ooh, don’t you look nice” with surprise… I could explain about the challenge, and blogging and making my own clothes.  But now I’ve had that little push, a lot more dresses are going to feature in my work wardrobe from now on: I just felt well-dressed, pardon the pun.  And yes, that means plenty more outings for Simplicity 2588.