Whenever I sewed maternity clothes, it was always with one eye on the long-term.  I wanted things that would fit my shape now, but also in the future.  I wanted to have the cake, and eat it.

So this maternity summer dress…

Granted, I left out one big factor: breastfeeding, which is completely impossible with this bodice and neckline.  So this dress is very occasional wear post-bump, but holds on to a firm place in my wardrobe post-boob.  Onwards and upwards!

I’ve blogged previously and effusively about maxi skirts (having sewn them in polka dots, border prints, and semi-sheer) so to recap just briefly, I completely heart them because: 1. They suit all seasons.  2.  They work for tall girls.  3. It doesn’t matter if you haven’t shaved your legs.

This particular maxi skirt has added serendipity – the fabric is from a thrifted pair of curtains (£4.99 from the charity shop), thus already fully lined and hemmed – and the print combines all three of my ultimate summer colours, yellow, coral and blue:

These are the luscious shades I paint my nails in, fill my wardrobe with, and generally gravitate to as soon as the sun comes out.  I usually have at least one or two in each summer outfit, but when all three of them come together… it’s like ice-cream for the eyes.  These colours just make me Seriously Happy.

The skirt is based on the Victory Hazel pattern, again!  I added a total of 8 inches to the front piece, to get 4x 1″ pleats across the centre for adequate bump space, and extended it to the floor.  I cut the outer fabric and lining at the same time (for maximum speed, accepting slightly reduced accuracy) and kept the original hems throughout (more measuring, but less sewing).

The back piece has no extra pleats, and is cut lower than the front.  This is one of the features I do like on Megan Nielsen’s Maternity Skirt – it feels comfortable and sits naturally in the small of the back – so I used that pattern as a guide for the curves. Then the top is just folded over and stitched to create a casing for the elastic.

And of course, there’s every skirt’s most important feature – pockets.

In hindsight, it could’ve done with being more A-line, to have sufficient volume at ankle-level… but hey, I’m not exactly striding along at the moment, so there’s enough space for my waddling gait.

Which colours are you buzzing about this summer?

This was a gem of a find in a charity shop – a cute and quirky duvet cover, in a nice crisp cotton blend, for £3:

I almost balked at cutting it into pieces… but it was much easier once I realised the whole print is truly deeply wonky! (Though that also made the actual cutting logistically harder…)

I wanted a pattern that would showcase the print without too many darts or seams, and plumped for the beautifully simple Victory Hazel dress which I’ve used twice before:

So a few maternity adaptations: I added 1/2 inch to each of the bodice seams to give an extra 2 inches round the bust; and added eight pleats across the front skirt (all 1 inch deep and 1 inch apart) to make space for the bump.

…with a bit of contrast on the back

Which sort of blends back in along the sides:

I almost finished this for May, but my Me-Made-May pledge fell sadly by the wayside this year.  I should have pledged to wear all the things that still fit me and to sew as much maternity wear as possible – in retrospect, I was far too over-optimistic about how much sewing I’d get done (what’s new, eh).  These days, more and more time is taken up with antenatal appointments, and sometimes I’m too tired to clean my teeth in the evening, let alone thread a sewing machine and get stitching.

But voila, this did get finished; it makes me feel pretty; it’s cool and comfortable; and it doesn’t need ironing.  Win, win, win.

Despite having one of the busiest fortnights ever (how does everyone pick precisely the same weeks for social gatherings, meetings, emergency meetings, birthdays, and nights out?)… I am still sewing.  Slowly.  And to distract myself from the incredible slowness – I’m blogging instead.

My last make for a Sew Weekly challenge a couple of weeks ago was inspired by this picture:

Empire-line, neck ties, two fabrics – does it make you think of Victory Pattern’s Hazel too?

That’s what I thought!  Granted, it loosens the fit up a little, but that completely suits my everyday wardrobe.  I’ve written more about this make and the pattern over here, but in short, I’m really very pleased with it!

So, just how many of the things I make are inspired purely by pictures I’ve found on Pinterest?  And where does the rest of the inspiration come from?  Well, based on what I’ve made so far in 2012:

(Yep, I got Tilly and the Buttons-ish and made a pie chart!)  As predicted, Pinterest (plus Red Carpet Fashion Awards, which I’m endlessly pinning on to Pinterest) did make the top slot.  Second place goes to Sew Weekly challenges, which rather surprised me.  And, though ‘inspiration from other sewist’s creations’ is not massively represented so far, I have quite a number of upcoming projects which definitely started off this way… when I finally get back down to sewing.  This week.  Maybe.

Where does your sewing inspiration come from?

Ahoy there! What do you think of my unabashedly summery dress? A little hopeful perhaps? I nipped out into my parents’ garden yesterday during one of the tiny rays of sunshine that flitted past for this photo.

Surprisingly, it was actually inspired by Dita von Teese…

Now I’m not much into the whole burlesque thing, but fully clothed, the woman is pure vintage perfection. Even at an outdoor music festival… what a fabulous outfit, from the sailor hat down to the espradrilles. I wanted a similarly relaxed but coherent look – cue quirky prints, bright colours, and a fit which doesn’t require a zip.

I couldn’t decide on just one pattern, so I’ve stuck two together at the empire line. I’ve previously made a full version of the Lisette 2245, but I really dislike the neckline and upper bodice – so cute on others, so disappointing on myself. And yet the lower skirt is so great, generously fulfilling my love of pockets. For an alternative bodice, I went for the Victory Hazel pattern. This is such a simple design, one front piece, one back piece, both cut on the fold… and yet it fitted my contours instantly, bust darts to neckline, in a way unrivalled by previous patterns (yes Colette Truffle, I’m looking at you).

I tried it sleeveless, but it didn’t have that Dita/Coachella vibe I was looking for, so I added some little caps:

Happy official summertime, my friends! Even if we have to wear our summer dresses with tights and cardigans…

Hello! Long time, no blog – first my site went down with a bug, and then I did!  I’ve been off work since Monday, and spent virtually all of that time in bed, in the bath, or moving between the two.

Generally, the silver lining of sickness is the time to potter around with sewing or stitching projects.  Even if you can’t face the rattle of the machine, there’s always some nice relaxing cutting or pinning or pressing or knit/crochet to pass the time with.  But, I just haven’t had the concentration for it – and instead, mostly been simultaneously completely bored and totally wiped out.

What I have been doing is a lot of reading. I’m pretty fast, which is actually kind of a curse because amazing stories are over too quickly, and I can’t afford to buy books at the same rate as I get through them.  So I read the good ones over and over.  And while I haven’t been up to sewing, what I’ve hankered after is a book about sewing. No, not a craft book, or ‘how-to’ book (which can be frustrating if you ‘can’t do’ there and then) but a story about someone sewing, and enjoying it.

About the only book I’ve ever come across that does it well is this one by my favourite author, Carol Shields.  Check out Amazon for the synopsis – but here are the juicy sewing bits:

“Brenda grew up wearing beautiful clothes. At Wilmot Public Grammar School in Cicero, when other girls wore dresses of faded rayon passed on to them by their older sisters, Brenda Pulaski wore fresh cotton dresses – Egyptian cotton; ‘Irons like a hanky,’ Elsa said – made from the latest back-to-school Butterick or Simplicity patterns. There was hand-embroidery or white pique trim on the sleeves and the collars. In fourth grade Brenda was the first in school to have a New Look ballerina skirt, the first to have a blouse with a Barrymore collar.” (p.27)

“When it came to Brenda’s clothes, Elsa had done most of the actual sewing, and she had done all the cutting. ‘Cutting tells,’ she like to say, emphatically and mysteriously. She had insisted, too, on putting in the zippers and setting the sleeves. ‘When you’re older you can set a sleeve,’ she promised Brenda. ‘Plenty of time for that later on.’ (Brenda at age thirteen or fourteen ran up side seams, basted, and did hems.) In the evenings while Brenda did her homework, or later, when she was in bed, Elsa sat under the lamp with the radio playing and worked on inverted pleats or handmade eyelets. ‘Sewing’s damn hard work,’ she used to say with just a hint of Slavic inflection, ‘so it’s just plain stupid to use cheap yard goods.'” (p.28)

“The quilting frame seemed altogether too rigid to contain what she wanted. Instead, she had begun the process of quilting on a lap frame – and before the actual piecing was finished. She was, in fact, uncertain about how to finish it, and feared that the weight of her hand might be overly heavy. She wanted a pattern that was severe but lyrical; she would have to be careful or she might rush it toward something finite and explanatory, when all the while she wanted more. Perhaps, she admitted to herself, staring out the window late one afternoon at the weak sunlight striping the garage roof, perhaps she wanted more than mere cloth and stitching could accomplish.” (p.45)

I hugely enjoy Carol’s Shields’ writing, characters, plots, and dialogue, but I do love this little vein of sewing that runs through Happenstance.

Things are on the up today, having spent some time taping together and cutting out a couple of Victory patterns.  I plumped for Hazel, after seeing Scruffy Badger’s beautiful colour blocking, and Chloe, after this cute version by Lizz.

(After sticking together 60 odd bits of paper, it feels somewhat anti-climatic to remember I still have the whole lot to sew.)

PS: Last but not least, I’ve been watching a few films, and one of my recent favourites is The Young Victoria – it’s quite, quite beautiful.  I just mention it because (a) the clothes are gorgeous: 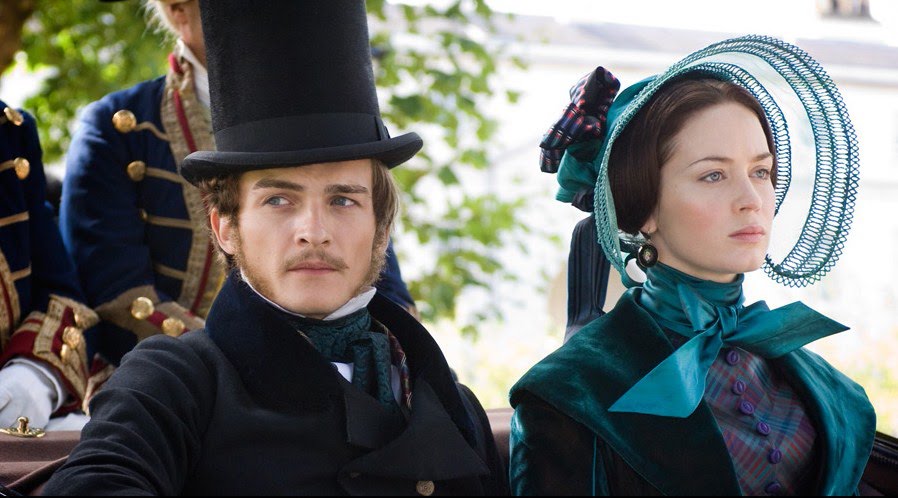 And (b), subsequent web-searching led me to Costume Captures, a blog which documents the clothing from period films, including The Young Victoria.  Each film is subdivided into the main costumes, with multiple shots of each one – perfect if you wanted to recreate something in particular.  One could spend hours browsing, and I probably have.

Have a good weekend everyone! (oh, and if you happen to see any fabric that’s a close match for Victoria’s plaid in the photo above, please shout!  Sadly no success so far.)